Oops. This product is only available in a minimum quantity of or more units
Konami Pro Evolution Soccer 2014 for Xbox 360
Roll over image to zoom in 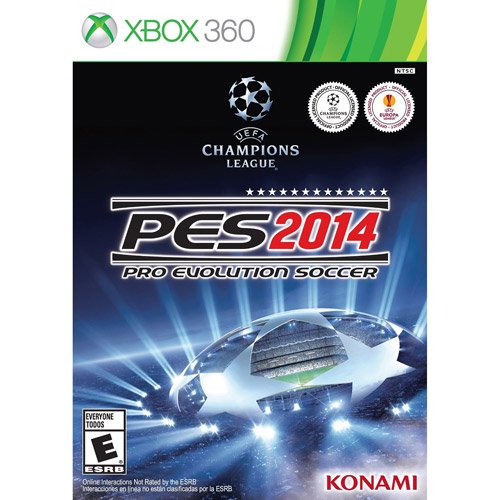 Pro Evolution Soccer 2014 will mark a new beginning for the popular series, with its new engine allowing for the most comprehensive advance in the PES franchise since its inception. For over four years, the PES Productions Team has looked at how matches ebb and flow to develop a new approach to football. As a result, PES 2014 will use Kojima Production's renowned Fox Engine at its core. Six central tenets combine to establish PES 2014 as a new benchmark in football simulations. They govern everything from the way the player receives and controls the ball, the physicality of play, and the 'feel' of match-day: the rush and euphoria or crushing lows that experiencing an important game can bring. Six Founding Pillars of PES 2014: TrueBall Tech - The ball is the center of attention: How it moves and how players use it Players now have total control on their bodies freeing them to nod, chest or flick a pass into space. First touch and superb control will set truly talented players apart from their peers. A full 360-degree, two-footed control system allowing you to shield the ball from opponents and master close quarter controls. Motion Animation Stability System (MASS) - Collision is finally detected! Players react to collisions based on their direction, speed, force, size, to display a life-like reaction. Combined with TruBall Tech, varied tackling animations will produce new life-like ball movements. MASS revolutionizes 1-on-1 situations allowing defenders to apply varied levels of pressure, and giving attackers options to out-pace, feint, pass or shoot when space allows. Heart - Capturing the emotional drive Recreate the home team support and introduce the "12th Man" Mental attributes will be affected when a player has a poor game, and one brilliant moment can turn the tide! PES ID - Capturing each player's full ID. Even more players will be recreated and will be instantly recognized for their individual animations and AI. PES ID goes even further to capture entire teams to replicate their basic playing ethos and style. Team Play - Control multiple players at once. Take control of 3 or more players to execute tactics in key areas of the field. Create space, exploit space, use the flanks or overlap play to make yourself available and beat a defense! The Core - Paying attention to all the little things Incredible attention is paid to facial movements and animations to connect one move to the next. Stadia will be faithfully recreated, from entrances to post match festivities and everything in between. Free kicks are now free! - Take control over decoy runs and make short passes while defenders can move personnel to block the ball. ESRB Rating: RATING PENDING