Oops. This product is only available in a minimum quantity of or more units
D3 Publisher of America The Croods: Prehistoric Party! for Nintendo Wii
Roll over image to zoom in 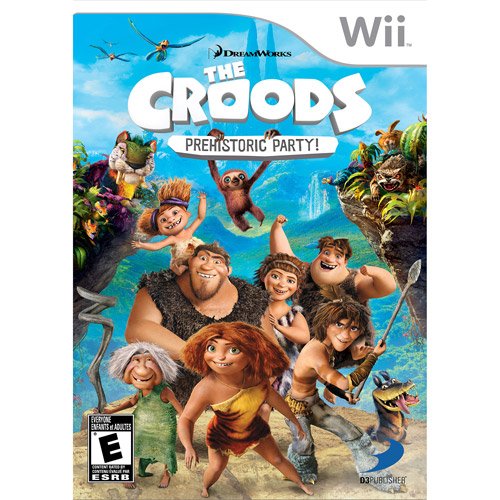 Join the world's first family on their first ever road trip in The Croods: Prehistoric Party!, as you play as one of the lovable Croods family on a hilarious adventure through a ton of unique and addictive party-style mini-games. With up to four-player multiplayer for Nintendo's Wii U and Wii systems (single player for handhelds), explore spectacular landscapes in an incredible new world filled with never-before-seen creatures as you battle yours friends and family in this awesome adventure. Play as one of your favorite Croods characters from the film - Play as one of the lovable Croods family members from DreamWorks Animation's upcoming feature film, The Croods, including Grug, Ugga, Eep, Thunk, Sandy, Gren and Guy. Conquer 30 mini-games on a hilarious journey - Compete or cooperate with players in comical games like Cave Painter, Banana Brawl, Punch Monkey Boxing, and Egg Ball! Step into spectacular Croodaceous environments - Explore amazing new worlds and discover tons of bonus items such as fire and ladders to use in play and to unlock new games. Play with bizarre Croodacious creatures - Never-before-seen creatures act as hazards, vehicles, pets, allies and more throughout the entire game. Four Player Multiplayer Mayhem - Play as any character and survive a host of challenges in the ultimate mix of friendly fun and prehistoric partying! ESRB Rating: EVERYONE with Mild Cartoon Violence